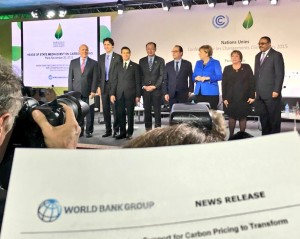 The Climate Summit in Paris began with calls from Heads State and CEOs of companies tor Carbon Pricing. One can say, after Paris there is no longer any doubt about the climate problem and the importance of carbon trading. The summit ended with two surprises: 1) the nations want to keep temperature rise well below below 2 Degrees, but maybe even below 1.5 degrees and 2) nations will rely on a robust carbon market.
There is a clear link between ambitious climate objectives and a well-functioning carbon market. We see this in the EU. The EU ETS ensures that the agreed targets are met. What should be done is to prepare the carbon market for sharper long-term CO2 targets.

Carbon trading was to disappear, but it has become just more firmly anchored 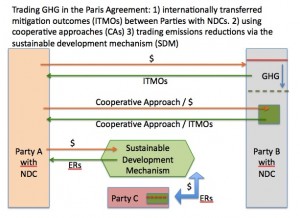 Collaboration for transparency
In all three above types environmental integrity should be ensured and double counting of emission reductions should be avoided. Paris also decided that the new Ad Hoc Working Group on the Paris Agreement (APA) will make guidelines for the market mechanisms.
New Zealand announced in a Ministerial Decalaration some sort of Carbon Club with 18 participation from US , Germany and The Netherlands and from South Korea to Indonesia and Chile, to cooperate on the elaboration of robust market rules (see for the full list of countries the Declaration). The UNFCCC can later incorporate those rules. Related to this work is the announced G7 Platform on Carbon Pricing and the Carbon Pricing Leadership of which the 2016 meeting is hosted by The Netherlands.

Future Steps
For the EU, Paris means that its emissions trading system, after the upcoming link with Switzerland, can connect more easily with countries that also have CO2 obligations asd cap-and-trade systems in place. Depending on the implementation of the SDM, the EU may use also these credits to increase the CO2 2030 target. The change of government in Canada, and Mexico, preparing a CO2 trading system, makes it conceivable that a North American CO2 market will be established; Hillary Clinton called for that. That would make a link between emissions markets in California and other states easier, as well as a link with the EU ETS.

From doubt to potentials
Carbon trading skeptics thought that carbon trading would disappear, but it has become just more firmly anchored. The reason? It is for governments an effective system to meet agreed emissions targets. And the carbon market can achieve early and additional CO2 reductions and certify them to use for future sharper emissions targets. And carbon trading systems improves international level playing field for businesses. Because the Nationally Determined Contributions will be tightened every five years, the carbon market can anticipate to this.

Perspective of Forest
In the second half of this century, global emissions must balance the reductions. That means the North will have to reduce more emissions than they emit! That requires the use of the global carbon market, cause reductions shaped come from abroad, It is also important that the CO2 reduction of forest protection (includes ‘REDD’) is included; that can create net reductions. It can generate early billions of tons of CO2 reduction yearly, if you can certify it to secure it and to give it a value.
REDD can use the 3 aforementioned carbon market access avenues:

Emissions from aviation and shipping
In comments it is noted that aviation and shipping is kept off the hook. That is not entirely correct. The emissions from these sectors fall under the global CO2 target. But the cross border nature of these emissions makes it more difficult to agree on measures. ICAO (UN aviation organization) is now working on that; at the Assembly in May 2016 ICAO will decide on a Market-Based Mechanism to meet the target of  ’emissions neutral growth’  and can then make use of the carbon market agreements in the Paris Agreement. The same is possible for IMO (UN maritime organization).

EU can link to ETS systems; but it is easier to simply allow to use permits from third-party ETS for compliance”: quoting Cozijnsen in MontelPowerNews

3,898 thoughts on “What CoP21 and Paris Agreement mean for carbon trading”