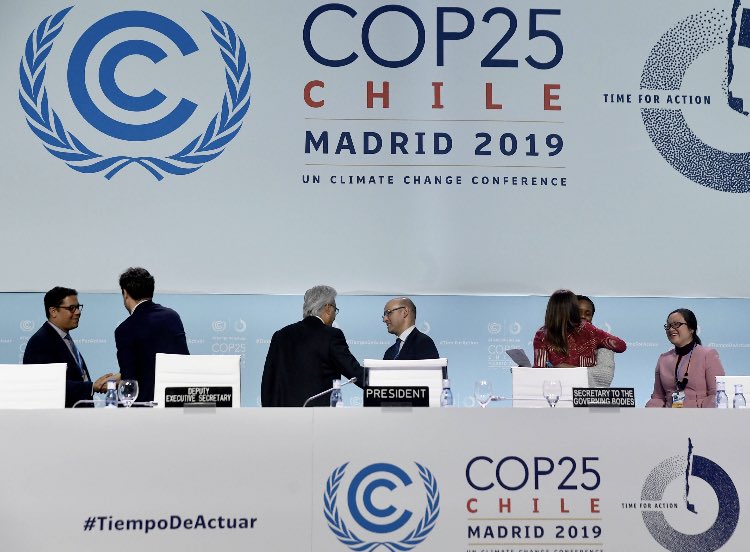 It is now up to the British.
Halfway through the climate summit it looked as the Final Declaration of the Climate Summit in Madrid would become very weak. That would make the postponement of the market rules even worse. The statement “Chile Madrid Time for Action“ now indicates that countries together do not do enough and must tighten their plans for the next summit in Glasgow. The draft texts on the international CO2 market indicate the contours of how the market can work well under the Paris agreement. It is now up to the British Presidency to propose a smart deal in 2020 that will disable blocking parties. There is, fortunately, a plan B as alternative. That is to introduce robust CO2 market rules with a leading group of countries: Carbon Club.

From the Declaration:“Re-emphasizes with serious concern the urgent need to address the significant gap between the aggregate effect of Parties’ mitigation efforts…. and aggregate emission pathways consistent with holding the increase in the global average temperature to well below 2 ° C above pre-industrial levels and pursuing efforts to limit the temperature increase to 1.5 ° C above pre-industrial levels ”

The climate negotiations outcome is often the greatest common denominator

In addition to the gap in the emission plans, many commentators spoke during and after the summit about the harrowing gap between the conference and the youth on the street, indicating that they had already expected tightening of the climate plans in Madrid. But that was on the agenda of the next Summit in Glasgow. There appears to be an inflation going on about the naming of the climate problem: from urgency to climate crisis, “extention rebellion” and “climate emergency”, which requires acute measures to survive. Campaigns of this kind do receive support from companies and national authorities that can take immediate action. However, the UN climate negotiations are based on consensus between countries that have a mandate from their parliaments, which leads to the greatest common denominator

Agreement that climate plans needs to be tightened is still on!

That the countries have agreed to strive together for 1.5-2 degrees of maximum warming is very important. But it is up to the countries themselves to determine the national actions as they want to be sovereign. That was the cause of the long debate about the final statement. Moreover, it was already agreed that countries would submit their strengthened climate plans in 2020. 70 countries have already announced that. The EU has stated in the Green Deal that it will raise the target from 40% to 50-55%, but still has to formally set it

Preservation of sovereignty rules (still) get in the way

The same pursuit of sovereignty is actually also the reason for problems in making CO2 market rules for the Paris Accord. But that stands in the way of international market rules. That part, Article 6 of the Paris Agreement, is the only missing part in the Paris Rulebook and has been postponed to the next summit.

What do the contours of the international market rules look like now and what are the next steps needed?

• The rules on carbon trade between countries that have achieved more reductions than their climate plan and countries with a deficit (Article 6.2: “Internationally Transferred Mitigation Outcomes”, ITMOs) and the prevention of double counting are almost complete. It is mainly about linking the emissions trading systems, which can be done with simple “double entry bookkeeping”. Developing countries, however, want every transaction between countries themselves to lead to additional emission reductions and a levy on this trade for the Adaptation Fund: a number of options are still on the table.

• The draft texts contain proposals to convert the old Kyoto projects in developing countries into more ambitious ones via the Paris Agreement (so-called Article 6.4). This can be achieved by making more demands on projects, by setting a benchmark or by demanding ambitious baselines. This leads to fewer new certified CO2 reductions (Carbon Credits).

• And there are options to abolish the hundreds of millions of old Kyoto credits: if a few years’ credits were left for domestic compliance, 100 million credits would remain. A discount, say 20%, can also be applied to the credits and the rest put in a Reserve. They could buy off parties like the EU so that the credits still hold a value: India asks for that because Indian companies had made investments. If the EU surrenders part of it, it is in fact raising the CP2 target for 2020 to 25%, which the Dutch court also required. Then the Paris Regime can start with a clean slate. But Brazil wants to keep all options open and prefers to use all the old credits and sell them to the airlines, which have an offset obligation from 2021 (CORSIA). In addition, they do not want to withdraw these credits from their own accounts after the sale.

• Finally, the old emission budgets of countries under the Kyoto Protocol: Assigned Amount Units (AAUs). Most industrialized countries retain part of that 2008-2020 budget: due to the economic crisis, countries had fewer emissions. The EU countries and Norway have indicated that they will not use that surplus; otherwise the Paris targets will not be achieved. But Australia wants to take its remaining budget, around 400 Mtn CO2, to the Paris regime. Of course countries had to resist to this stance.

That is why it is good that this topic, Article 6, has not been completed in Madrid: “better no deal than a bad deal for the climate”. Now it is up to the British Presidency of the Glasgow Summit, November 2020, to isolate opponents of a good system and come up with a smart deal. It is also important to have a better picture beforehand of how many old credits we possibly have. It is not clear now whether the Paris Accord is thereby at risk. The draft Art 6 texts will not be discussed until June 2020 at an official meeting in Bonn.

Yet countries are not only dependent on a UN deal. A group of now 31 countries have formulated a number of principles that they believe the mandatory CO2 market must meet: “Leading countries set benchmark for carbon markets with San Jose Principles”. Costa Rica played a leading role in this.

They can get to work on this, pending UN rules. They then only trade with each other and not with countries that sell old credits, for example: this creates a ‘Carbon Club’, a concept developed by Environmental Defense Fund. In this way they already fulfill the assignment of Article 6.2. and the trade in CO2 reduction / emission allowances contributes to additional and cost-effective CO2 reductions that are necessary for the Paris Accord and investors know that their reduction projects hold value.

These agreements in the context of the Paris Agreement have an effect on the CO2 obligations of countries; and also for companies that are mandatory under the EU Emissions Trading System. And for the international CO2 obligations that aviation will have under the ICAO Aviation Convention after 2020. This has no effect on the voluntary CO2 compensation market.

The reductions achieved by compensation projects in developing countries or in their own country are reported by the country itself and help that country achieve its CO2 target under the Paris Agreement. The buyer of certificates – Gold Standard or VCS – thus compensates for part of the company’s own CO2 emissions elsewhere. There is no question of double counting. The company that does the compensation, usually in addition to the own reduction, does that voluntarily. The CO2 emissions of that individual company are also not reported by the Netherlands. And secondly, because the CO2 reduction certificate does not go to the Netherlands either. The Netherlands therefore does not use that for its purpose. The CO2 reduction is therefore only used once for a CO2 obligation.