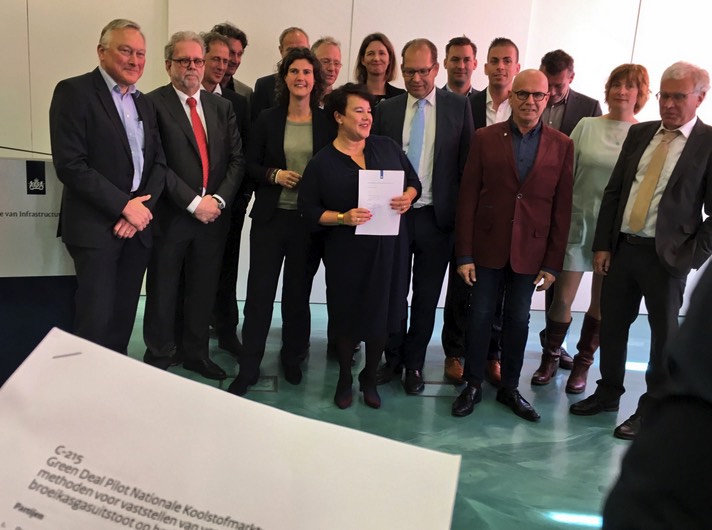 As was announced at the National Climate Summit in October 2016 “Bring Paris Home”: the “Green Deal Pilot National Carbon Market” will now be signed in The Hague on 11 May. Signatories are by Environment Minister Sharon Dijksma and 16 market participants, ranging from environmental federations, local climate funds and ‘Natuurmonumenten’ to Essent, Energy and the Climateneutralgroup.

With this GreenDeal – or also covenant -, a system is being developed by participating parties using accepted methods for demonstrating CO2 reduction in projects. These are projects in non-ETS sectors such as buildings, transport, agriculture and forestry. Think about projects for heating and cooling in offices, CO2 capture in agriculture, methane reduction by manure digester, protection of peat etc.

After launching the projects and the verification of the reduction – if possible simply based on ISO16064-2 – CO2 certificates can be issued. These are valid as proof of successful climate action. And they can be sold on the voluntary CO2 market. Buyer can be everyone who wants to compensate for its carbon footprint with CO2 reduction in their own country, such as tour operators and parcel deliveries, as well as municipalities and individual citizens

Jos Cozijnsen, one of the initiators and assisting the systems development: “With testing a national CO2 market, new reduction potential is identified and an innovative financing system is being developed. It is urgently needed to also reduce CO2 emissions in non-ETS sectors and to offer opportunities and incentives”

Carbon price tags / carbon value
In recent years, the Environment minister has promoted the deployment of ‘CO2 price tags’ for emissions worldwide (for example, via the Carbon Pricing Leadership Coalition membership. This green deal wants to generate a ‘CO2 value’ to domestic projects in which CO2 is reduced. The green deal is an initiative of market parties and environmental organizations that see opportunities for more ambitious climate policy, market opportunities and financing for innovation.
If this green deal works well, around 0.5 Mton of CO2 can be reduced annually, possibly with a CO2 market value of EUR 1 to 10 million, depending on the paid price.

Cozijnsen: I am loooking forward for this years’ New State Of Voluntary Carbon Markets Report to see whether the demand for local carbon compensation is growing and the willingness to pay a higher price for higher value too.

Avoiding double counting
The governments interest in the green deal is to support climate action and local initiatives and help clarify which reductions are additional to climate policy and, perhaps, to use a CO2 market for the national obligations in these sectors in the longer term.
The green deal provides four working groups of parties that develop the system: measurement methods, verification rules, a platform and a registry. A College of Experts will oversee the system and standards. The government and participating members finance setting up the system. Over 2 to 3 years, the system can be financed by a fee system, also because than standards often used will mostly have been identified and accepted.

Cozijnsen: It is obvious that these certificates can be used on the voluntary CO2 market only; not also on the compliance market, like EUETS or ICAO/CORSIA. Hence, that would lead to ‘double counting’ or ‘double claiming’. These project certificates could only be used that way IF the government would add the reduced emissions back again to the national inventory after selling them. Maybe such approach gets adopted after this pilot.

International perspective
Similar initiatives are in other EU Member States. Foreseen is a meeting of European initiatives in The Hague late 2017 to see if more cooperation can be achieved and whether a European system can be established. Internationally, there is also interest in domestic CO2 markets. Just this week, countries in Bonn under the Paris Agreement are considering the use of transferable reductions, including domestic offsets and how to to avoid double counting of reductions. They also discuss how to avoid double counting with the aviation carbon market mechanism (CORSIA), if credits are transferred to ICAO.