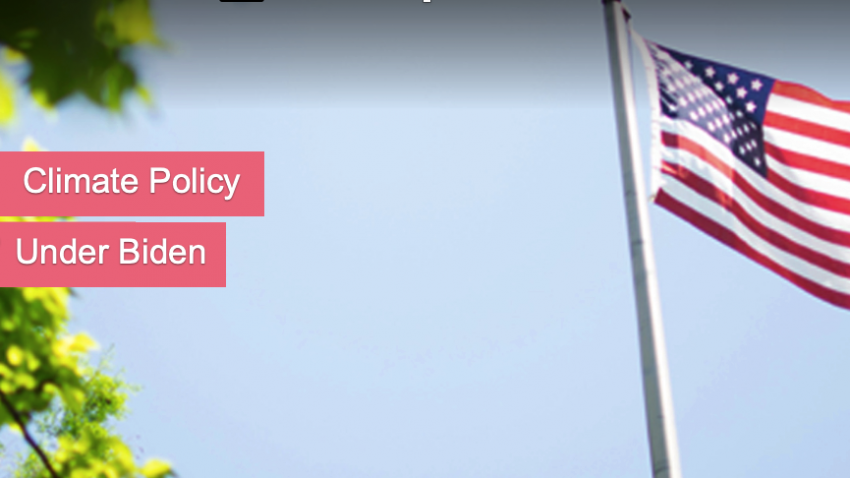 With Biden, the United States can give global climate policy the necessary stimulus, and fill in the political vacuum if it gets its own house back in order. New US President Joe Biden cited climate as one of his priorities. Now that he can have a majority in the Senate with 50 Democratic senators and with a ‘Build Back Better’ and ambitious Climate Plan in his pocket, his commitment to 100% ‘clean’ energy and net-zero emissions target by 2050 and former Secretary of State, John Kerry, as special climate envoy, I expect a lot from the US. On a number of points I expect the US to provide an incentive for more global action. Biden even plans to hold an international gathering of heads state of the 20 largest emitting countries within the first 100 days of his term. But there are also risks this it will all not be that easy.

National circumstances
With Kamala Harris as Senate Chair, and 50 Democratic senators, Biden can get a majority in the Senate for regulation. For example, it should be possible to get more support for renewable energy, cleaner infrastructure and electric cars. He wants to invest 1.7 trillion dollars on this over the next ten years and mobilize another 5 trillion dollars in the market. And more importantly, Biden will be able to roll back some of Trump’s rollbacks, get the environmental agency EPA back to work on climate, stop oil drilling in sensitive areas in Alaska, and allow space for the “clean cars” programs. The EPA will soon be headed by Michael Regan, former deputy vice president of environmental organization Environmental Defense Fund. And the important Environment and Public Works Committee will be chaired by Delaware Democrat Thomas Carper who said, “Climate change is the existential threat to my state, our nation and the world.”.

Too progressive US federal climate policy is not to be expected

Biden sees great opportunities to get agricultural states on board: “We see farmers making American agriculture first in the world to achieve net-zero emissions and gaining new sources of income in the process”. His new agriculture minister Tom Vilsack can continue with what he started under Obama: stimulate emission reductions in the cheese and milk sector and, with the help of a Carbon Bank, give premiums for carbon sequestration in soils and forests. Biden announced this in his transition memo for agriculture Climate 21. He thinks that agriculture and forestry can achieve 10-20% of the required reductions and CO2 sequestration needed to achieve zero emissions by 2050.

Filibuster
But too progressive federal climate policy is not expected. There are also senators from coal states, forcing Biden to navigate cautiously and making compromises. If he continues Obama’s “war on coal”, he risks losing the majority. Democratic Senator Joe Machin III of coals state West Virginia has already said that he will use the so-called “filibuster“: then 60 senators can block decisions. He will, like a few years ago, block a bill for a federal carbon tax or cap and trade; he is, however, in favor of nuclear energy and CO2 capture storage.

Just Transition
In other words, to pass a federal carbon trade or carbon tax, “Just Transition” is needed, just like in the EU and Canada. In his Climate Plan Biden announces that he will involve disadvantaged vulnerable areas in climate policy. And managing climate policy with presidential decrees will not last long. But individual States will remain able to continue to link their own cap and trade systems and that of Quebec in Canada. Much climate policy can already be implemented by states: 41 of the 52 states have pursued climate policy in recent years and were able to reduce their emissions from 2005 to 2017.

International aspects
Now that the US can become active internationally again and John Kerry can immediately strengthen his contacts, this will provide a necessary stimulus for global action, in this important year when nations are asked to increase their targets to secure meeting Paris goals. The fact that the US and China had agreed to provide insight into each other’s climate policy made it possible to conclude the global Paris Agreement in 2015. And even though China itself continued with its climate policy, there was an international vacuum in leadership. Countries such as Saudi Arabia, Kuwait, Brazil and Australia stepped on the brakes. They blocked agreements in response to the 1.5 degrees report from the IPCC and agreements about financing and rules about the global CO2 market. China and India now expect to be approached by the US again. And India is counting on investments again. Cooperation will be sought with Brazil. Biden wants to mobilize $ 20 billion with other countries, such as Norway, to conserve forests in the Amazon region. partly by combating deforestation caused by the large import from Brazil of meat and soy.

At the end of this year, the United States will have the opportunity to take reengage at the Climate Summit in Glasgow in November. But the US will have to show a number of things there:

I do think that Biden and Kerry as they put it “rally the rest of the world to raise their ambitions alongside the United States”, as well as soon as things are in order at home. And in addition to politics, the EU can also link up with the US in concrete matters, such as investing in clean energy and transport, in agriculture and forest and methane reduction in oil and gas, bringing the net-zero emission targets even more within reach.

NB: Kerry, Regan, Vilsack are all nominees for the Biden Administration to be confirmed.